In July, JCL welcomed Bibiana Machátová as the new director of our academic and HR departments. We asked her a few questions to get to know her a bit better.

Tell us a bit about your career so far.

I started teaching for Caledonian School at the beginning of 2006; I taught in-company courses, public courses, and post-secondary studies. I wanted to do more and I became a Senior Teacher in 2008. I observed English teachers and also teachers of minority languages — I especially enjoyed Japanese, Hebrew, and Finnish. I became a Director of Studies at Caledonian School and Tutor in 2014 (that was five years after the schools merged). I was an in-house methodologist together with another colleague. We led the team of STs, organised workshops, and cooperated with course managers, sales, and marketing. I also took part in meetings with clients and prospective clients. In 2016 (after EDUA was bought by Mr. Vladimír Schmalz), I became the Academic Manager — I led the two Directors of Studies and oversaw methodology and HR processes including recruitment, onboarding, and offboarding). I also helped to merge the methodology and HR departments when Mr. Schmalz bought Jipka. In July 2018, I was named Head of Caledonian School and officially represented the brand. Apart from methodology and HR, I supervised the team of course managers, the team of course coordinators, and one sales-person. I also communicated with clients. Now that we have merged with JCL, Martin Borl is leading the CM and CC team, and I am leading the new academic and HR team. This summer has been extremely busy as we have had to work on several projects at the same time. We have had to revise contracts and bonuses, and most importantly, unify processes. We are not done and some projects we are working on are long-term.

When you were a child, what did you want to be when you grew up?

I always wanted to be a teacher. My cousin and I would play with dolls and plush toys and pretend we were teachers and they were our students. Then when I was in high school, people thought I would become a lawyer or economist. Somehow I was always attracted to teaching — I started when I was a freshman at Charles University and I still have one student.

What is your favourite cinema in Prague where you can also watch films in English?

I absolutely love Kino Aero. I used to occasionally work there when they started with live broadcasts from the MET. I saw about three seasons of operas! I like that itʼs not a multiplex cinema and they show good movies — old and new. They also have some really cool projects like summer film camps for kids of different ages. My older son has been to their film camp four times and my younger one cannot wait to be 10 so he can go, too.

I like Asian food, so it’s fun to go and explore the restaurants that open in Karlín. I don’t go every day, but I like to go out for lunch with my colleagues at least once a week. I used to have a colleague who introduced us to Vietnamese cuisine and taught us to make spring rolls, summer rolls, and pho. So when I eat lunch out, Vietnamese is my favourite.

Which Czech band would you recommend to your colleagues?

I absolutely adore the band DVA. They sing in languages that everyone knows but nobody understands. My favorite song is “Nunovo Tango”. Check it out!

What kind of food would you offer to an alien if it landed in your back yard?

Iʼm Slovak so thereʼs only one true answer — halušky, of course! 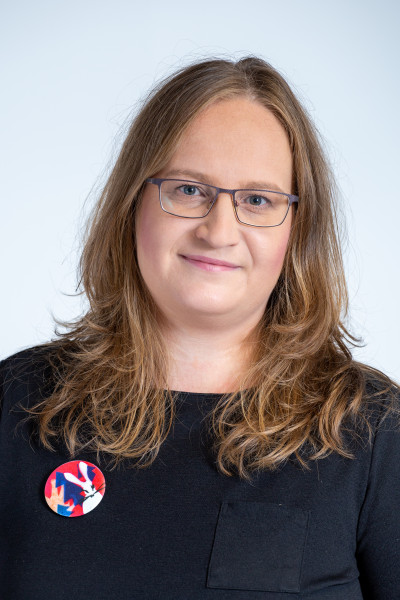